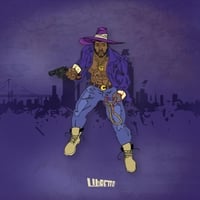 After a strong return year in 2016 with Gangsta Jazz 2, Portland (via Watts, CA) artist Libretto is kicking off 2017 with a new full length project entitled, Captain Crook Snatchin’ Crumbs and All. Featuring an all-star line up of talent including; Guilty Simpson, Vursatyl, Jumbo, Stewart Villain, Theory Hazit, Tony Ozier, and many more, Libretto finds a way to steal the show on every track. For his first scheduled release of the year, Libretto connected with Kiasu Records to release his long-awaited project, plus a very special limited-edition vinyl pressing of Captain Crook Snatchin’ Crumbs and All (available now via CDBaby). Coming in strong at 17 tracks, Libretto’s latest project plays out like the theme music to a 70’s Blaxploitation film, rich in funk and soul grooves with Captain Crook narrating the story of every song. CCSC&A serves as Libretto’s official sophomore LP, following up 2004’s Ill-Oet after almost 5 years in prison. Back and better than ever, look for the official video for King’s Throne dropping soon and be sure to Stream or Purchase Captain Crook Snatchin’ Crumbs and All via Kiasu Records and CD Baby.