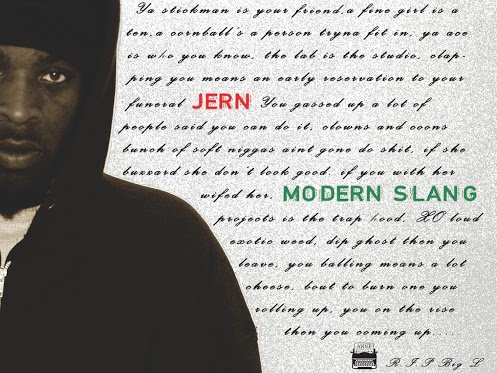 Jern
In the tradition of stellar artists and producers hailing from Virginia comes Jern; a Norfolk native with a style and flow unlike any of his predecessors. His stamp of approval is official as he's been blessed to rock on tracks produced by Nottz and featured on songs with Mic Legacy, Khizman of DMP, Che Grand and Truck North of The Roots.

However, Jern is not defined simply by who he's worked with - his definitions speaks for themselves on the ode to the legendary DITC member, Big L. Modern Slang is an adaptation of Ebonics, updated with new slang and peppered with VA style, while never departing from the real hip-hop vibe. Jern's witty wordplay and classic production by TROT (@AWNP_TROT), along with scratches by the highly respected DJ Strez (@Strez757) makes "Modern Slang" a gem for both Golden Era purists and new schoolers alike.


Dir by Treezy for Visually Inklined