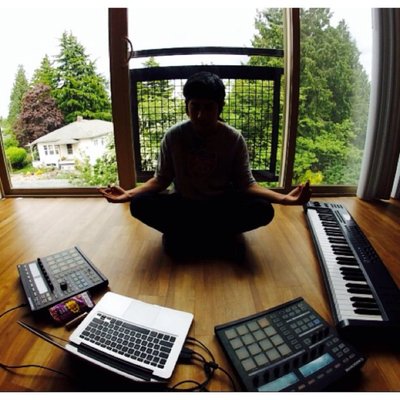 "I actually got my name one day when I was in symphonic band and I was assigned a part too play the "Anvil" and I had already loved the name through blacksmith's because that was the main tool too create weapon's so it symbolized a producer too me and that's why I stuck with it.."

2.    What inspired you to become producers?

"The main reason I became a producer, was because I had loved music since I was in diaper's, I dont remember a day I wasn't jammin too music, So I had alway's wanted too take the name as a producer sooner or later.. My mom and step dad had split too and life ended up too struggling everyday, so the main worry was my mom and little brother's and who was gunna help, So I stepped my game up and became what I am today. So that's by far my main inspiration"

"I started when I was 10 about too turn 11, I just messed around and ended up making a large file of track's that I had ended up losing, so I had stopped and when I went into freshman year, I had copped a Macbook and a Maschine, and got back at it, I had started making 4-6 beats a day and I was only 13 at the time, during that time and now I have been working on a 14 track album called "CHIEF"  with my close friend Oshea Lee, Just released "The Danger Room" with Saga, completed about 200 beat's total, and now striving too meet tons of inspired artist like me and Saga, and just have a good run"

4.       What’s your favorite thing to do when you aren’t writing/producing/playing etc?

"Probably have to be chillin back with my mom and helping her out, or chillin with my nigga's and goofin around"

"If I'd have too make a list of five... It'd have too be Eric "The Arc" Elliott, Wadada Leo Smith, Miles Davis, My Jazz ensemble teacher Robert McG, and Charles Mingus,

"Anything lately I have been listening too so much my life that I like everything, my main though, is Jazz"

7.       What surprises would we find in your music collection?

"That most of my tracks out now are stuff I have finished when I was 15, so if ya'll mess with that, be ready for the newer stuff!"

8.       Todays music is about collaborations what "hot" rapper out now, you would love to work with on a project?

"I'd have too say Eric The Arc Elliot, because not just musically I can relate too that man.. Through his songs, I have found out a lot of thing's that we have both experienced and how similar we are, I even found out that me and him are born on the same day, August 12th, and we both are producer's so I feel like me and him would automatically click and make master piece's."

"Hopefully positivity or inspiration, I put a ton of my soul in the song's so I really hope my listener's will feel what I felt when I made the song"

11.   Where do you see the generation heading?

12.   Is there any advice you'd like to give to young aspiring artist ?

"Keep striving too your goal's and you will see good thing's in your future for sure."

13.   What projects should we be on the lookout for in the near future?

"Oshea Lee's "Chief" album all produced by me will drop in August, Moor Gang's Mackned is gunna use a hot track produced by me for his next project date for that is still unknown, and my label partner Rob Sim's "Clear View EP" drop's 7/11/14