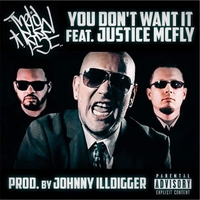 Montreal based The Low Rise, consisting of two of the city's seasoned heavyweight emcees, join forces with Justice McFly on the Johnny Illdigger produced single You Don't Want It from their debut album Building... Raw, pure, authentic hip-hop music.
The Low Rise ft. Justice McFly "YOU DONT WANT IT"
Veteran underground emcee Penzo Gritty and Verbal from the NL5 (Northern Lights) hip-hop collective have combined forces to form The Low Rise.
Justice McFly is featured on this single from their debut album titled "Building..."
The track is produced by Johnny Illdigger. The video is available online and was filmed, directed, and edited by Dave Dialect.

Montreal based The Low Rise, consisting of two of the city's seasoned heavyweight emcees are launching their debut album together titled “Building...“ Verbal, well known as a member of the Hip-Hop collective NL5 (Northern Lights), collaborates with one of Montreal’s underground front
men Penzo Gritty. In collaboration with many of the city's finest
producers, they are bringing to life a heavy-hitting, honest and personal project in their debut LP. Stay tuned for more from The Low Rise.