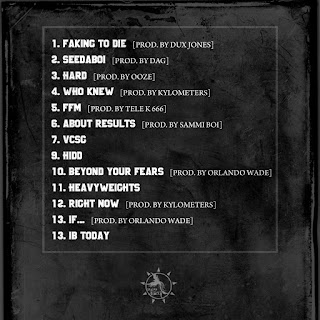 Indigo Black is a collective of young rising stars out of the Metro Detroit area. Brought to you by CrackKillz Da G.O.D "My vision was to create a brand that could be anything. Whether a clothing line, cologne or even record label. Hints Indigo Black, so I hit up all of my homies. Ones who I knew had a unique vision, though align as one common goal together. 2eazy, Maz, Skvnny, Big Bro Lo, Gina, Ooze, Manny Diesel, and Bop all make up Indigo Black.
Indigo Black derives from Indigo Children. We just so happen to be black. Lol. The inspiration behind the album was having fun and being yourself. That's all we talk about, keeping it real and being genuine.
Over the course of 6 months we created this project. The process wasn't hard though it wasn't easy. Some records came from me, mostly all we came up with together. Or just trusted each others vision and went with it.
Records that stand out to be are " Faking To Die " "Who Knew" "SeeDaBoi" and "VCSG".
"Faking To Die" is a track talking about how folks aren't living to die but fronting and not keeping it 100. In return they're considered fake to death.
"Who Knew" is a record that basically says hey I believed in myself when no one else did. Who knew I'd be here today....me.
"SeeDaBoi" is a fun record. The first record we ever recorded together. Featuring then member Dagger out of the 734. The record is also produced by him to.
"VCSG"(Vibing Chilling Smoking Grooving) is a love song where we express how it feels to be digging a lovely lady.
twitter: @IndigoBlackDet
SoundCloud: IndigoBlack313
Instagram: @IndigoBlackDet